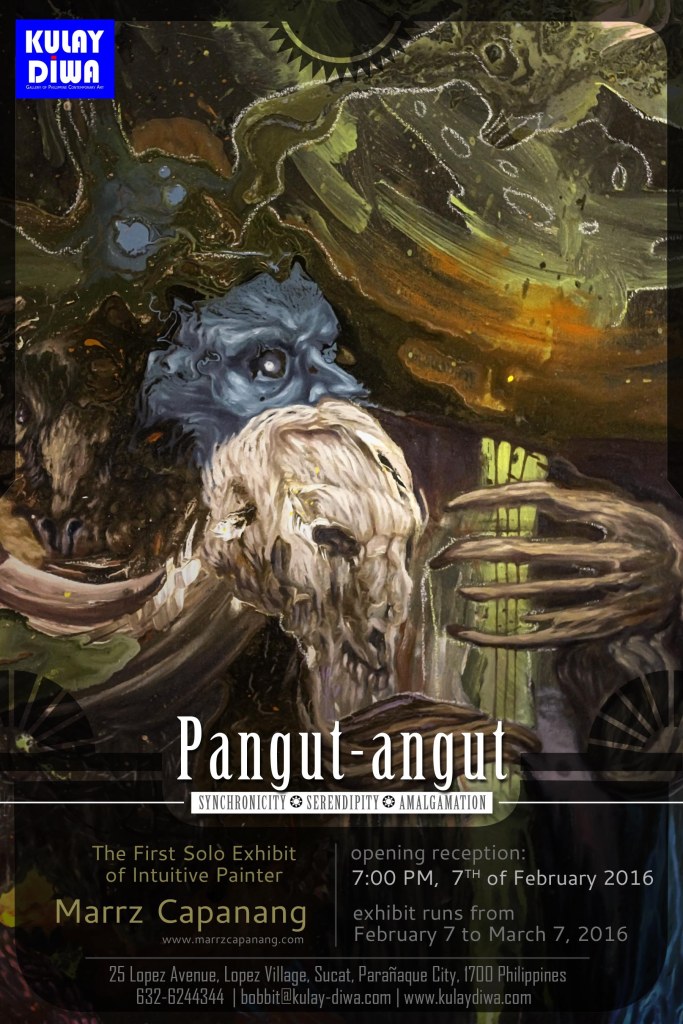 Where he grew up, the houses are so near each other that you could almost hear the dreams and sufferings of the ones who live next door. Where he grew up the most beautiful amalgamation of harmony and chaos thrives.

Marrz Capanang grew up in Calaparan – a place by the sea; a place which has been notorious for prostitutes, drug pushers, gangsters, and pickpockets.  There, Capanang started doodling stars under a big wooden table. In Calaparan, the dreamer knows no limits.

PANGUT-ANGUT – Serendipity/Synchronicity/Amalgamation is Capanang’s celebration of his journey as an artist and visionary. His earlier years were made of struggles brought about by poverty and by not being able to truly “Trust the Sound Within”.  He used to capture his thoughts and visions through realistic paintings, but as he received his “Heightened Senses” with humility and gratitude, his process became more natural, intuitive, and buoyant. The fine lines grew free, flowing and ebbing. The images faded to give light to the abstraction of hues, strokes, and stories.

Each piece in this first solo exhibit represents a step he has taken: a question, an epiphany, an unlearning, a stripping-off-the-mask, and an unfolding of truths.

Capanang’s kindred connection with animals and plants has shaped him.  “The Devil be With You”, “Thread and Poison” and “Gloomminded” are messages of protest against cruelty to Earth – animal poaching, animal testing, and this carnal aim to gain profit to the expense of our oceans, forests, and tribes.

“Please, Take a Look, Said the Tree”, “The Ocean, a Woman”, and “Colors in the Ocean” raise questions and calls to action for man’s abusive behavior (such as illegal logging, harmful waste and plastic disposal to our seas, illegal fishing, and mass tourism) towards our one and only home.

“Discovery of the Wider World” reflects this blessing that he has welcomed in his being. Magnifying his life, he has deeply realized that he has been born to breathe in vastness – to worship no hierarchies and walls. This gift of art and vision has carried him away from the cage of being alone.

In his piece “Revenge”, Capanang unlearns this Romantic idea that nature can infinitely just give.

His conscious choice to immerse himself in community engaged art and community projects led him to a much deeper glare on poverty and the plight of the little man. “Your Blood, Their Gold” and “In the Middle of Everything” capture how he perceives the toying of the rich to the poor. Moved by his first-hand experiences and encounters with drug pushers and runners, laborers, obreros, urban and rural poor, he pulls out the golden curtain to reveal the filth, trickery, and abuse in these paintings.

“Shield of the Weak” speaks of Capanang’s intention for us to give more compassion and empathy to the vulnerable and the needy – to protect them from succumbing to darkness and not using them to feed our greed.

Capanang has rediscovered this magic in being the boy who doodled stars on the skin of the earth.

His series “Broken Pieces of the Aquarium” is an offering to his humble beginnings, to his family, and loved-ones who have shared what it is like to be poor in the pockets but never in imagination and faith. It is an offering to those who are considered impoverished and marginalized. The aquarium is just an illusion – there are grander things for them waiting to be reaped by breaking, by leaping out.

This is PANGUT-ANGUT. We are serendipity, synchronicity, and amalgamation.

We are harmony and chaos.

We are trees, forests, the connections, and the wild.

We are children of the stars. 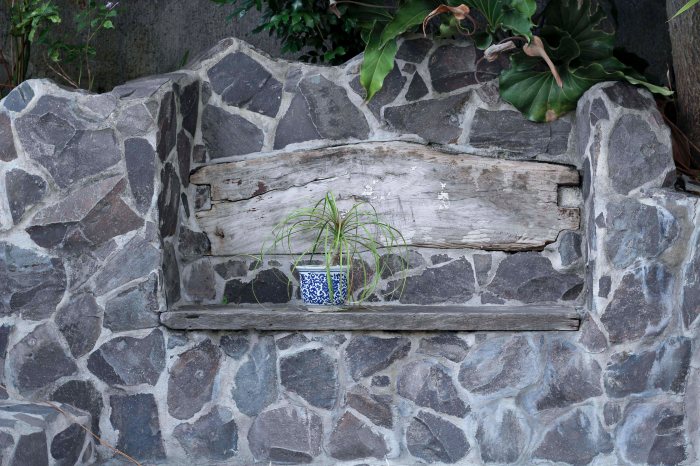 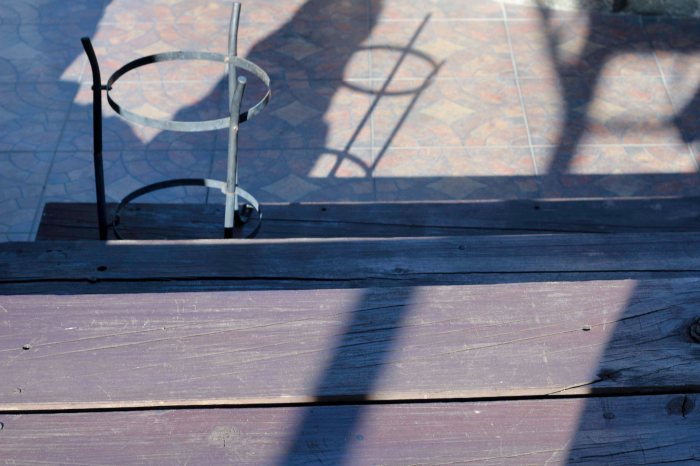 Views from outside of Kulay Diwa Gallery

Janice and Tet visit the Exhibit before opening 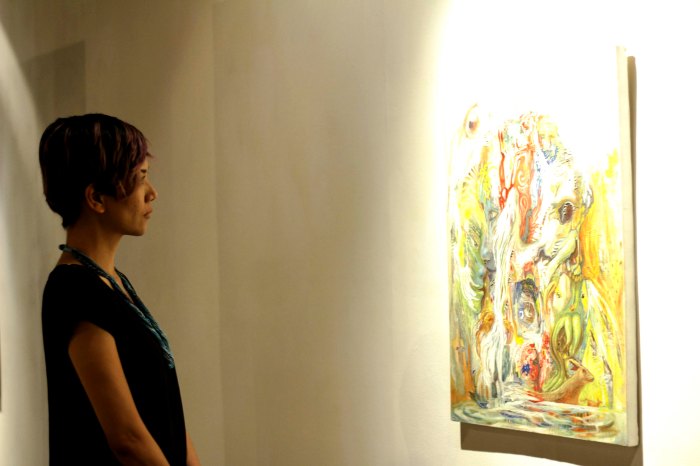 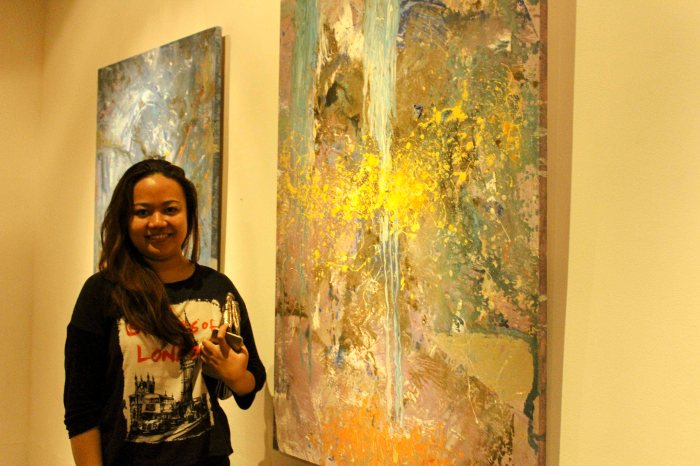 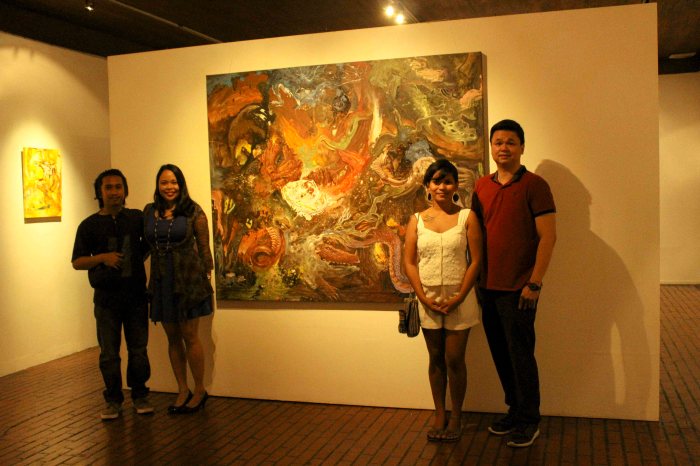 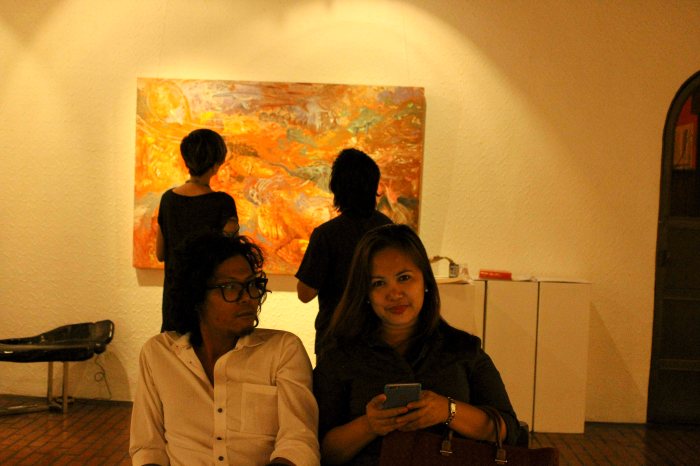 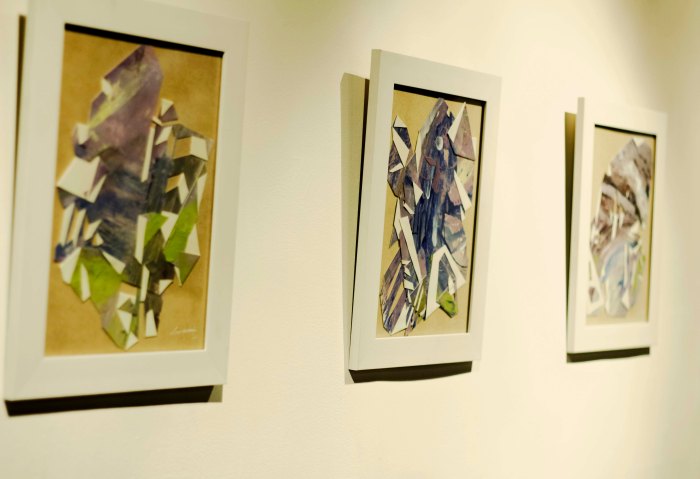